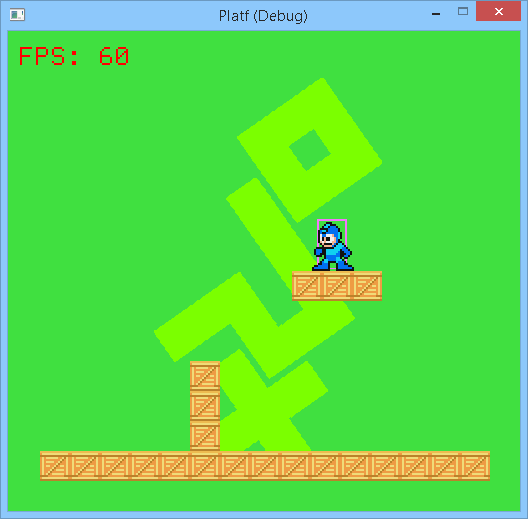 The topmost platform in this picture moves left and right. For some reason, however, when I move my little Megaman onto the platform, he does not move with it, instead remaining static. I thought I may be able to solve it by continuing to call the physics handling event for as long as the player remains on the platform, and using it to apply some impulse that'll move the player alongside the platform, but there does not seem to be a way to accomplish this - at least, I haven't been able to find anything while looking through the tutorials, the examples and the API doc. It only covers one-and-done type collision deals which doesn't help me at all.

While looking through the wider web, I did find a possible solution. That's with the use of the Friction value. If I give both the player and the platform friction, then that will make the platform carry the player properly. But that comes with its own problems: even with friction as low as 1, it makes the player move slower while on the platform that they'd otherwise be (right now, moving left and right on the bottom platforms and in the air gives a Speed value of 319, but moving left and right while on the platform lowers it to 223). And also, having any friction at all will make the player cling onto the side of the platform if they hit it from the side and move towards it in the air. I think this could maybe be solved by setting Friction to 1 while the player is stationary but setting it to 0 when in the air or holding left and right. Problem there is that there doesn't seem to be a way to change Friction during runtime either! There's no orxObject_SetFriction nor anything like it.

I feel like there's a really easy solution to all this and I'm just not seeing it for some reason.